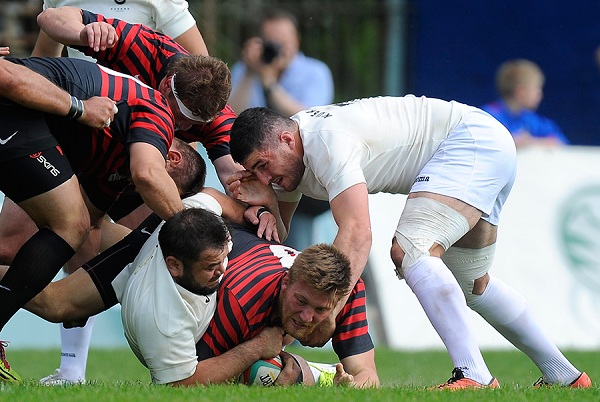 09/05/2016
The starting match the Russian championship in 2016 rugby season began, heralding not much intrigue: in the 5 th minute attempt Alexander Yanyushkin and its implementation Ilya Demushkina give the home side: 7: 0.
On the 30 th minute – attempt of Andrei Lizogub: 12: 0.
Monintsy were clear leaders in the field, not allowing “Kuban” to complete any attack. Only a 41-minute penalty by Sergei Sugrobova “soak” through the first half: 19: 3.
On the 16 th minute of the second half of the match spectators witnessed a beautiful attempt by Alexander Romanov: newcomer “pilots”, broke away from his pursuers, took the ball from the middle of the field, his attempt in the middle. The striker owners easily coped with their part of the work, and the score was 19: 3.
But in the second half of the second half, “something went wrong” and “Kuban” put three attempts in a row: 21 th, 33 th and 35 th minutes.
Five minutes before the end of normal time the score was 19:20 in favor of the guests.
After the match in favor of the “Kuban ‘Krasnodar error prevented rugby: lose the ball, they have not been able to regain the initiative. “VVA-Moscow” to make the most of the last minute: prolonged attack resulted in Ilya Demushkina attempt. He successfully struck the implementation, and the match ended with the score 26:20 in favor of the home team.